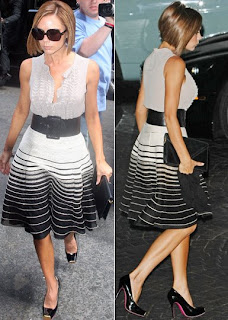 Back in July I commented on Princess Annes recycling of her own vintage dress from 27 years previously.

Well it seems that Victoria Beckham, Queen of the WAGs and seemingly the ultimate champion of disposable, wear it once, designer fashion, has also picked up on the recycling outfits concept.

Back in June she wore this gorgeous outfit to a meeting, and then last week she was snapped wearing it to Gordan Ramseys new LA restaurant.

Now it might not seem a big deal that she repeats an outfit, after all, I think I wear the same thing at least 2 or 3 times a month, but the key difference is no one wants to take my photo. (shame)

I have the luxury of thinking “Hmm, I wore this to a party last month, but this is a party with different people who haven’t seen it before”. Victoria Beckham and the rest of her celebrity ilk don’t have this luxury as the worlds press have them photographed and plastered all over the place every time they leave the house.

VB is wearing EXACTLY the same outfit in these pictures, shoes, bag, belt, everything. If she’d put the skirt with a different top, or worn the top with jeans then I think we could assume she was treating her wardrobe like every other woman in the world. But to do this so blatantly, and so soon, makes a huge statement, without her even having to open her mouth, about fashion as a disposable commodity. 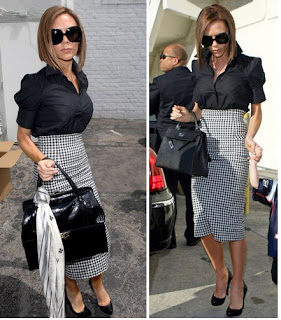 Whether she knows she’s making this statement or not is kind of irrelevant to me. The fact is that the idea of recycling outfits and buying quality over quantity get out there.

Indeed this isn’t even the first time she has been seen in repeated outfits. Earlier this year she was papped wearing the same high waisted gingham pencil skirt and black shirt combo she had previously worn to a premier. On this occasion the photo was even taken as she left LA Vintage Store The Way We Wore making the statement even more relevant!