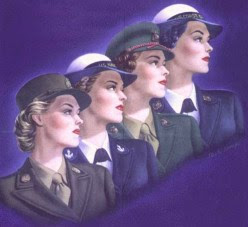 Well, I can pretty much say I’ve never felt so patronised as I have this week by a “promotional magazine article” about women in the British Army.

The article in question features “Jenni” posing in a fashion shoot style photo alongside an editorial interview about her time as an HR Administrator in 2 Royal Welsh Regiment.

The editorial encourages us to “celebrate our equal rights!” by joining the Army, and helpfully reassures us that “you’re even allowed some make-up these days!”

In her “interview” Jenni is asked how she manages to cope without her “dose of celeb goss” when she is abroad on operations, but it seems that she doesn’t need to as the welfare office helpfully get the glossies delivered to troops in Iraq. Phew. Thank goodness for that. Suddenly spending each day under daily threat of violent death seems more appealing now I know I can keep up with Katie Holmes changing hair styles while I’m there.

Jenni also reassures us that although Basic Training is “hard work” it’s “only 14 weeks” after which, presumably, you go onto the important army business of deciding which shade of lipstick goes best with desert camouflage and whether khaki is in or out this season.

90 years after it was admitted that UK Women (well some of them at least) were capable of concerning themselves with politics as well as ribbons and kittens without causing themselves permanent physical damage you could be forgiven for thinking that we had finally reached equality.

However it would seem that, even whilst trying to encourage them to join up, the British Army, at least, still considers women mentally deficient in some way. I can safely say that amongst my reasons for not joining the army I do not list a lack of make-up and glossy magazines.

At a time when soldiers are spending increasing amounts of time away from their families, fighting often controversial wars, it seems inappropriate to be attempting to encourage more female recruits with the promise of free magazines. 176 British Soldiers have been killed in Iraq since 2003 and it would be nice to believe that when they joined up they knew what they were getting into, rather than being enticed in by the promise of a free i-pod.

Personally I consider myself a well rounded individual. I can put up a tent and I know how to stop my eyeliner smudging (pat eyeshadow over the top…) The point is I can choose from a variety of skills appropriate to the situation in which I find myself. When I worked for a plumbing and drainage company I wouldn’t have got anywhere by screeching “Ewww!” every time I saw a blocked drain, but that doesn’t mean I go around seeking them out for fun, and the same applies to any person who chooses a career in the forces. We don’t assume that women are put off from a career in the legal profession because they are worried that the wigs might mess up their hair.

If you have major concerns that someone might take your mascara away then possibly a career in the military isn’t for you, but this isn’t sexist, it’s just a fact of the requirements of military life that applies equally to a bloke who can’t possibly live without his hair gel. Trying to pretend that these limitations don’t exist is not only patronising, but downright deceptive.

If the British Army are serious about making it a more appealing career path to Women then maybe their money would be better spent appealing to professional pride of both genders and addressing the deep seated sexism inherent in the Armed Forces that make them think that this kind of advert is the best way to appeal to Women.